Where do we go to when we get tired of staring at the screen and want to have the possibility of live interaction with another human being or just take our phone for an outing surrounded by other people? The natural choice would be a coffeeshop or a café. The official coffee street of  Helsinki is Korkeavuorenkatu. Everybody knows that.

There are a handful of places to choose from.

The Traditional: Café Succès has been there forever. Family run by two brothers and their mum it is slow in changing , which can be both good and bad, but you can always count on getting a classic that’s been on the menu for many decades: The Korvapuusti, or the huge Cinnamon Bun.Personally I like the smaller version of the bun because it is juicier and you feel better when you know you can finish it all. I go there when I want to talk to people, see familiar faces and for their salmon soup.

If you fancy something smaller, go for the Lemon Meringue Pie. 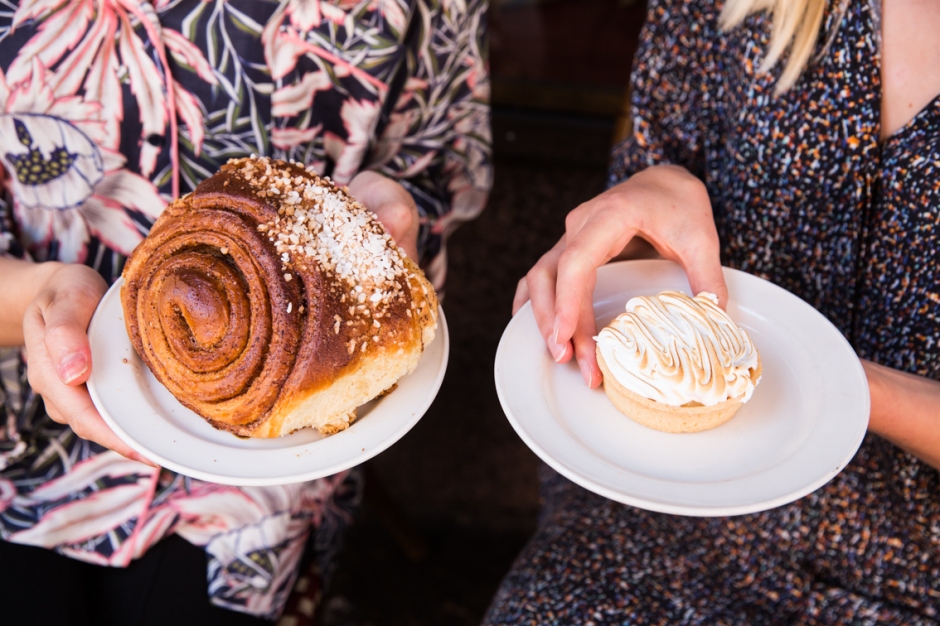 Succès Café society now also on Instagram and it is also a PokeStop! Yesterday they gave you an ice cream if you caught a Pokemon and posted it on their Instagram account.

The Sweet One: The cupcake / bagel place just popped up over night it seems like. The Little Brooklyn Café, a branch of the original café, with the same name (minus Little), on Fredrikinkatu, has been open now for about a month. Founded by two sisters originally from Brooklyn themselves. I tried their over night oats with banana but found it a bit too sweet. Banana would have been enough as a sweetener, no need for extra sugar. I definitely go there for the super sugary Red Velvet cupcake with a cup of just black coffee.

The Healthy: To start with there were only space for three to sit by the window and watch people pass by at the Sis Deli café. I usually went there to have limited or no social interaction, just to read the newspaper and have my black coffee. Now, with some clever re-designing of the seating area, there is place for up to 7 trendy bloggers having collaboration coffees. Tasty healthy soups, I like the lentil-and-coconut soup, and fresh smoothies on the menu, lots of clearly marked gluten free and vegan products. I find the sallads a bit too expensive for what you get. I go there with my son because they make fresh gluten free sandwiches on the spot.

The Cool Café: Mood on Tarkkaampujankatu around the corner from Korkeavuorenkatu. Guests on the cool hipster Punavuori-side having meetings or reading papers. Minimalistic interior with big up-side-down-turned lightbox-lamp that is perfect for beautiful selfies. The chairs by the big concrete table a bit too low and uncomfortable. I go there for the Matcha Latte with oat milk and to have a chat with my most fashionable friends.

New for the weekends are breakfast and colourful smoothie bowl style brunches organised by Best Things Brunch. Next brunch this coming weekend 23h and 24th of July. It looks just like the stuff I like, green and fruity.

The Chain or Something: Robert’s Coffee / Kahvilla (the shop) is part of a big chain, with one café in the glorious Östermalmshallen  in Stockholm. I have a thing with laminated floors boards, the thing being…I dislike them. Strongly. So I have avoided that one. If I were to go there it would be for buying a last minute Christmas gift or because it is on the sunny side, at least at some point of the day. Afternoon I’d say.